Photograph courtesy of The Kellogg Co.

BATTLE CREEK, Mich. — The Kellogg Co. will spin off its snacking business and two other segments to improve the focus of all three new companies.

“These businesses all have significant standalone potential, and an enhanced focus will enable them to better direct their resources toward their distinct strategic priorities,” said Steve Cahillane, chairman and CEO of Kellogg. “In turn, each business is expected to create more value for all stakeholders, and each is well positioned to build a new era of innovation and growth.”

The Global Snacking Co. will include the global snacking, international cereal and noodles, and North America frozen breakfast categories.

According to Kellogg, this business is expected to expand profit margins through operating leverage, revenue growth management, productivity and increasing emerging-markets scale.

In 2021, the company’s brands had net sales of $11.4 billion and estimated earnings before interest, taxes, depreciation and amortization (EBITDA) of approximately $2.0 billion on an adjusted basis, based on preliminary allocation assumptions.

Geographically, North America will represent just under half of net sales, emerging markets about 30% of net sales and developed international markets more than 20% of net sales.

North America Cereal Co is focused on ready-to-eat cereal in the United States, Canada and Caribbean.

As a standalone company, North America Cereal Co. aims to have greater strategic focus and operational flexibility, and will direct capital and resources toward unlocking growth, regaining category share and restoring and expanding profit margins, according to Kellogg.

The company said that short term, North America Cereal Co. will be focused on the restoration of inventory, profit margins and share position following 2021 supply disruptions. Long term, it will focus resources and strengthen the business through enhancing its portfolio, operating capabilities and productivity.

The company had estimated 2021 net sales of $2.4 billion and estimated EBITDA of approximately $250 million on an adjusted basis, based on preliminary allocation assumptions.

The proposed management team for North America Cereal Co. will be announced in the future.

This business offers a full portfolio of plant-based offerings, currently focused on the United States, Canada, and Caribbean. Plant Co. includes Morningstar Farms, which was acquired by Kellogg more than 20 years ago.

Kellogg aims to accelerate net sales growth over time with this company from previously disclosed portfolio-segment assumptions. It also plans to build on its strong base of growth and profitability, focusing its resources and investments towards capitalizing on strong category prospects, by building awareness and penetration in North America and expanding internationally in the future.

Plant Co. had estimated 2021 net sales of $340 million and estimated EBITDA of approximately $50 million on an adjusted basis, based on preliminary allocation assumptions.

The proposed management team for Plant Co. will be announced at a later date.

Kellogg expects that the North America Cereal Co. spin-off may precede that of Plant Co., which is currently targeted to be completed by the end of 2023. The proposed spin-offs are intended to result in tax-free distributions of North America Cereal Co. and Plant Co. shares to Kellogg Co. shareowners. Shareowners would receive shares in the two spin-off entities on a pro-rata basis relative to their Kellogg holdings at the record date for each spin-off. 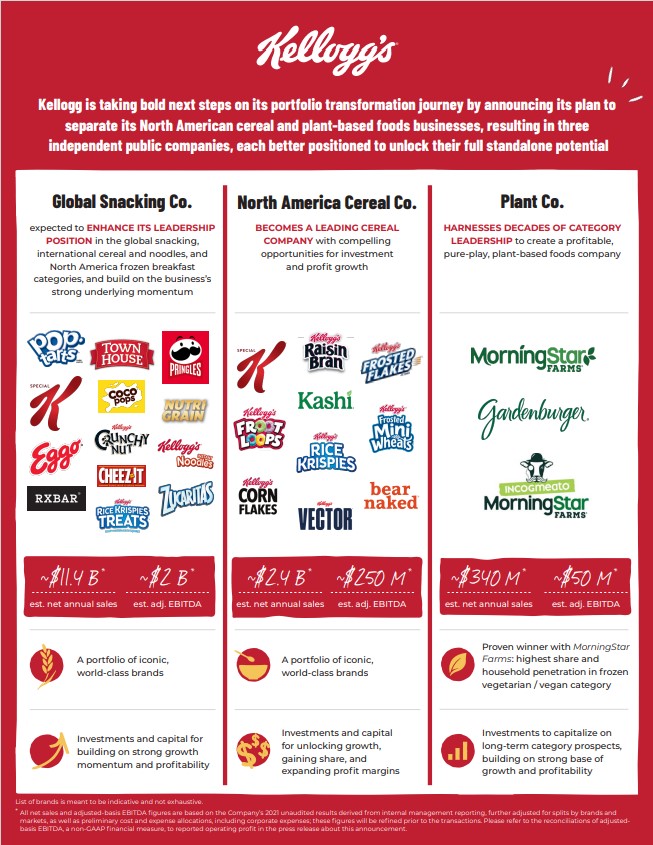 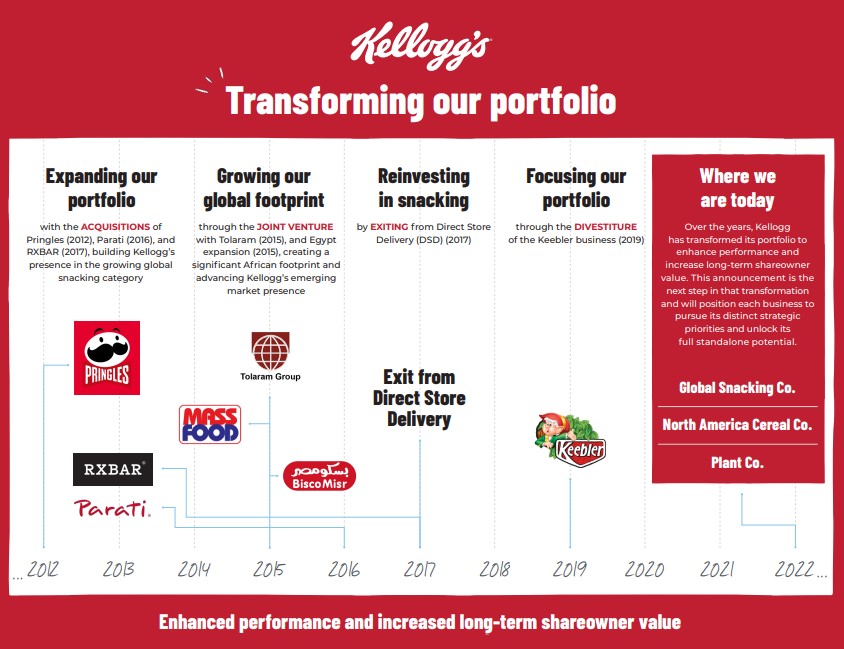