TOPEKA, Kansas -- Mars Chocolate North America has announced that it will invest an additional $100 million in its Topeka, Kansas, site, breaking ground on a new 90,000-square-foot facility. As part of this expansion, the company will create a total of 70 new full-time, permanent, high-wage manufacturing jobs. 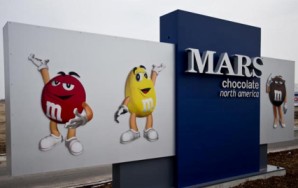 "For over a century, Mars has been committed to making our products in the markets where we sell them," said Tracey Massey, president of Mars Chocolate North America. "We are grateful for the warm welcome and continued support we have received from Topeka and the state of Kansas, and we are pleased to further invest in the community with additional job creation and economic development."

Mars was the first chocolate manufacturer to reduce single-serve products to below 250 calories, it said, and in recent months, the company has brought to market a range of new product offerings with a focus on introducing more options fewer than 200 calories. Earlier this year, the company brought back M&M's Crispy at 180 calories per serving and in August will launch nationally goodnessknows Snack Squares at 150 calories.

"Our consumers and retailers are demanding even greater choice, seeking more product variety across a range of format, calorie and price options," said Massey. "By further growing our footprint in the U.S., we will better be able to introduce new treats to satisfy the most diverse consumer appetites."

Mars' expansion in Topeka follows the grand opening of the facility in 2014, the first new Mars Chocolate North America site built in the last 35 years. With this expansion, Mars' investment in Topeka totals $430 million, today employing more than 200 people producing a variety of M&M's brand candies and Snickers Bars.

This latest investment follows recent announcements by Mars of additional expansion across the country. In June, Wm. Wrigley Jr. Co. announced it would be adding 155 new employees at its Flowery Branch, Ga., facility to support additional sugarfree gum production. In addition, Mars Chocolate North America also shared news of its plans to hire 20 new associates in Albany, Ga., to support the national launch of goodnessknows.

Goodness Knows What Mars Will Come Up With Next