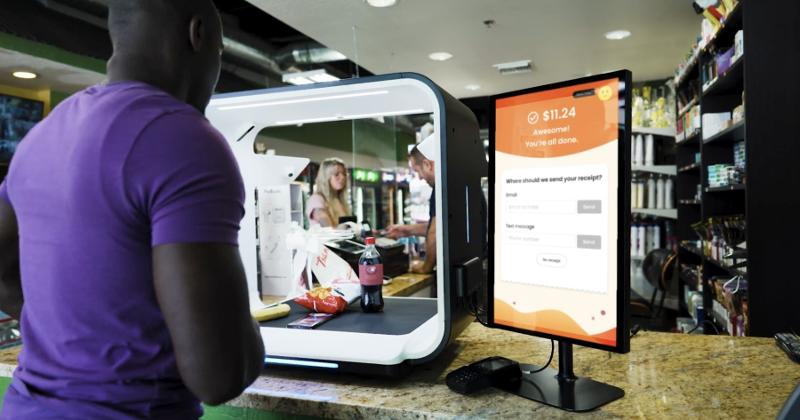 CHICAGO — Despite the many hardships of 2020, there were plenty of silver linings for convenience-store technology. CSP has written at length about the new level of prominence loyalty and last-mile services reached in c-stores in 2020, but the industry’s accelerated adoption of contactless checkout services also deserves recognition.

Compiled here are some of the most consequential steps retailers and suppliers took to integrate contactless checkout in 2020 and a few signs of where it might all be headed.

The first was with Standard Cognition, a San Francisco-based startup that opened one of the first frictionless stores in the Bay Area. Couche-Tard partnered with Standard to launch the first c-store retrofitted with artificial intelligence (AI) technology, in Tempe, Ariz., with other stores to follow.

In this first store, Circle K customers can choose to have a completely touchless shopping experience by paying via a smartphone app, with cash or card at a kiosk or by visiting a traditional cashier station.

The switch to contactless at one Tempe, Ariz., store isn’t a huge change for Couche-Tard, the second-largest chain in the channel, but it could be an important step for Standard to further engage convenience retail. “We believe convenience stores will be the first major market to quickly adopt autonomous checkout,” said Jordan Fisher, co-founder and CEO of Standard Cognition. “With over 150,000 convenience stores in the U.S. alone, this is a key market for Standard.”

Couche-Tard’s second contactless venture was with Mastercard. The pilot uses Mastercard’s Shop Anywhere program, which is customizable and can help enable drive-thru or even the ability to shop outside of regular hours. By October, Circle K launched at-the-pump and in-store frictionless experiences at select locations in the U.S. and Canada.

But Couche-Tard didn’t stop there. The Laval, Quebec-based company started 2021 by partnering with McGill University in Montreal to open a retail innovation lab to test frictionless tech and other retail innovations. Using an app, customers can unlock the door to pick up items and leave. The system recognizes selected items in real-time and automatically processes payments in the app.

The lab is currently open at reduced hours and limited capacity due to the pandemic, but it could serve as a sign of where Couche-Tard is taking in-store technology. “By having a live laboratory, we are confident that the research projects and technologies successfully tested at the lab may eventually be implemented in some of our 14,220 stores across our global network,” said Deborah Hall Lefevre, chief technology officer for Couche-Tard.

Between this test and its U.S.-based pilot programs, Couche-Tard is aggressively exploring contactless checkout at the very least.

7-Eleven Wallet users are not charged any loading or transaction fees and incur no interest fees as with credit-card charges, the company said. The cash option involves a physical handoff of bills or change, but it has the potential to cut down on the number of times customers and staff have to come into physical contact.

Altoona, Pa.-based Sheetz has rolled out a “SHcan & Go” feature allowing customers to scan and pay for purchases through the Sheetz app. Available at all 600 Sheetz convenience stores as of April 2020, this feature minimizes interaction in the checkout process in support of social distancing recommendations.

Customers activate SHcan & Go through the Sheetz app when in store. It can be used for convenience items such as drinks and snacks but is not available for gasoline, age-restricted items requiring proof of identification or made-to-order food and Sheetz Brothers Coffee items.

Mike Fogarty founded Choice Market in 2017 to give Denver residents access to a high-tech store that sold local food in an accessible format. The fourth and largest store, opening this March in the Golden Triangle neighborhood, is perhaps the closest thing to that ideal Fogarty set out to create, he said.

“Each of our locations is designed specifically for the neighborhoods we serve,” Fogarty said. “Despite being one of the fastest growing areas of Denver, the Golden Triangle neighborhood has limited retail and natural grocery options. We can’t wait to share this larger format and the new One Choice shopping experience with everyone.”

Known as Choice Bannock, the 5,000-square-foot Golden Triangle location is one of the world’s largest personalized and frictionless stores, according to Fogarty. Per the name, customers have a choice whether to pay traditionally with cash or card, or scan the proprietary One Choice mobile app upon entry and simply walk out when they’re done. Customers can also order delivery from the store, and the Choice Delivery Team will deliver it to their door in 45 minutes or less using its fleet of electric vehicles and e-bikes. Alcohol can be delivered, as well.

New York-based Caper is known for its smart grocery store carts that can weigh groceries, scan them, suggest recipes and more, but the company made it clear in October that it intends to see its tech in c-stores as well.

The company released the Caper Counter, a small tunnel that customers can place their items into for checkout that fits on a typical countertop. The technology is powered by artificial intelligence (AI) and designed for stores of less that 10,000 square feet.

To use, shoppers swipe their cards directly on the device or use Apple Pay or other near-field communication (NFC) technology to checkout. The Caper Counter requires a power cord and WiFi password to get the device up and running in a store.

Meanwhile, GetGo Cafe + Market, the c-store arm of Pittsburgh-based grocer Giant Eagle, is pointing toward another possible checkout-free future for its c-stores: Grabango.

To get started, shoppers download the free Grabango app. Then they may enter the store and shop normally; there is no check-in required or turnstile, instead, products purchased are tracked by overhead sensors. When they are finished in the store, shoppers scan the code in their Grabango app on the way out. Afterwards, they receive a digital receipt in the app.

Berkeley, Calif.-based Grabango specializes in checkout-free technology for existing, large-scale store chains. The Grabango platform is a network that processes millions of simultaneous transactions. The system places no limits on who can enter the store, what can be sold there or how the shelving is configured. Grabango was founded in 2016 by Will Glaser, who is also a co-founder of Pandora Media.

The big retail magilla got in the act, too. This past fall, Amazon added a palm scanner to two Amazon Go units, implementing another layer of contactless commerce tech for physical retail.

The technology requires users to insert a credit card and hover their palm over the device so it can connect the customer to their chosen method of payment. Once that is done, customers can hold their palm above the Amazon One device for about a second to gain entry to the store. The device does not require the user to have an Amazon Prime account when first identifying their palm.

Amazon One gives customers the option of scanning their palm instead of a QR code on their mobile device to enter an Amazon Go store or wherever else the technology may appear in the future. For now, Amazon One is only available at two Amazon Go units, both in Seattle.

“We believe Amazon One has broad applicability beyond our retail stores, so we also plan to offer the service to third parties like retailers, stadiums and office buildings so that more people can benefit from this ease and convenience in more places,” Dilip Kumar, vice president of physical retail and technology for Amazon, said in a blog post.

Seeking to address concerns about cleanliness and privacy, Kumar wrote that Amazon One is completely contactless, meaning that customers do not have to physically touch the device to use it. Customers can request that Amazon delete whatever data the Amazon One device has on their palm and payment at anytime. Kumar also said palm images are never stored on the Amazon One device itself. Rather, the data is encrypted and sent to a cloud database Amazon manages.

Contactless tech isn’t only for in-store use, according to Waltham, Mass.-based Global Partners. Global announced in January that it is implementing PayByCar, a pay-by-text service, at all 30 Alltown gas stations in Massachusetts. The technology will allow fuel customers to pay without having to use cash, a credit card or a mobile app.

Upon entering a participating gas station, PayByCar recognizes a car’s transponder and sends a text to the customer’s smartphone. The customer then replies to the text with the pump number and PayByCar automatically turns that pump on, registers the transaction, charges the card and sends the customer an e-receipt.

Global Partners isn’t the only company finding techy ways to make paying at the pump safer. Kum & Go, based in Des Moines, Iowa, has introduced a new mobile fuel pay experience. This technology lets reward members skip the keypad and activate the pump with their smartphone.

“Let’s be honest, no one gets joy from starting a pump. On a cold winter’s day, the last thing you want to be doing is standing outside paying for gas,” says Tanner Krause, president of Kum & Go. “Today, in our current moment, limiting common contact points is essential. So we created an app feature that significantly reduces the time to activate a pump and allows you to do most of it from the comfort of your vehicle.”

The secure mobile payment platform uses the existing Kum & Go mobile phone app, which verifies the customer’s credit card and handles the payment. The customer enters the pump number to start the pump and begins fueling.