RICHMOND, Va. -- Although Altria officials said all but two of the 43 lines of smokeless-tobacco product taken off retailer shelves last month in a U.S. Smokeless Tobacco Co. (USSTC) recall should have been available in stores as of last week, a number of retailers reported they are still awaiting product.

Recovering from its most staggering recall in recent memory, amounting to "millions" of cans of smokeless tobacco, officials with USSTC and its parent company, Altria Group Distribution Co., Richmond, Va., pulled 99% of effected product from 160,000 stores nationwide within seven days of its Feb. 1 announcement. Altria established a website that, at press time, told customers that nearly a third (28 of the 43) product lines affected would be back in stores by the first full week of March.

When contacted by CSP Daily News, an Altria spokesperson said that as of last week, all but two brands—Skoal Bandits Wintergreen and Skoal Bandits Mint—would “be at retail or making their way there soon.” The Wintergreen product was expected to arrive in mid-March and the Mint by mid-April, he said. 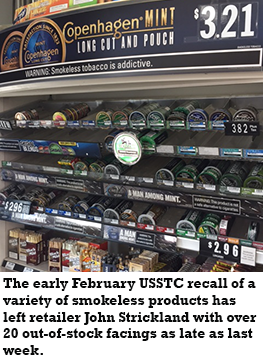 Such optimism appeared to be wearing thin among multiple retailers contacted by CSP Daily News. Last Wednesday, a month after Altria announced the initial recall (which was triggered by consumers finding a metal object in their tins), John Strickland Jr., president of Wayne Oil Co., Goldsboro, N.C., said the moist-smokeless section of his stores had 27 out-of-stock SKUs, even though his wholesaler dropped shipments off just the day before. (See related photo.)

“We are continuing to see out-of-stocks on top sellers of Altria product,” Strickland told CSP.

Six other retailers, operating in states spanning from Alaska to the Carolinas, reported similar conditions. Requesting anonymity, the retailers said they received clear word about the recall, which they all responded to quickly, but communication about stock replacement was virtually nonexistent. While the initial letter retailers received was hopeful, no further word followed. Then orders went unfilled and out-of-stocks began, the retailers said.

“I don’t fault Altria for removing the product as that was the right thing to do, but I do fault them on their failure to communicate to us on the resumption of product shipments,” Strickland said. “Moist tobacco is one of our highest sellers and profit items. Customers are angry. We’ve sourced competitive product but even that has not helped meet demand.”

“Communication was very poor,” said retailer Sam Odeh, president of Power Energy Corp., Elmhurst, Ill., “and execution of the product fulfillment is still not back to normal.”

The Altria spokesperson said the company has been communicating with retailers and wholesalers on a weekly basis about what products would be available for order. Trade communications to retailers are sent via email and also posted to its website for retailers at www.insightsc3m.com. Trade communications to direct-buying customers or wholesalers are sent via email and posted to www.altriasales.com, the spokesperson said. He was uncertain as to how retailers may have had higher expectations than what Altria had communicated, as the updates were consistent through the supply chain.

While asking that CSP not post their internal documents online, the spokesperson sent editors two letters, one addressed to “Valued Retailer” and another to “Valued Direct Customer,” which goes to its wholesaler class of trade. The wholesaler letter noted four products “available for order effective immediately and will deliver beginning March 5, 2017.” The retailer letter said those same products “will be available with a first wholesale delivery date of March 5, 2017.”

A notation at the bottom of the communication also said, “The above dates are estimates and subject to change.”

“Certainly, there could be instances of lag in getting product to certain retail stores,” the Altria spokesperson said. “It takes time to build inventories at the wholesale and retail level when recalling millions of cans and orders of the affected SKUs have been very strong.”

While editors reached out to three multistate distributors, one did not reply by press time and one spoke only on background, saying that they are shipping product out as fast as they receive it, but fill rates are not yet where they need to be. McLane Co., Temple, Texas, issued a statement to CSP, saying it was working with USSTC and remained in “constant communication” to receive product and help limit out-of-stocks. “The situation is difficult ... for the manufacturer, as there is a process in place in the production of their product,” McLane officials said. “[But] to shortcut this process in an effort to solve in-stock issues is not an option for their product and standards. We believe they are doing everything possible to solve the issue.”

Adding to the logistical challenges, one Midwest retailer said he had thousands of dollars in pulled stock that he hasn’t been paid for. “We’re playing their bank,” the operator said, speaking on condition of anonymity.

When Altria asked retailers to pull product, the company offered a one-time payment of 50 cents per can based on a one-week average of purchases, with those payments starting March 30, the spokesperson said. In addition, he said USSTC has had a process in place for a number of years for retailers to return product, whether out-of-date or in situations like a recall. “We are processing returns as quickly as possible for reimbursement,” he said, unable to give an exact timeframe for that turnaround. “But we’re doing it as quickly as possible.”

While Altria has asserted that its top smokeless brands were not affected by the recall, the Midwest retailer said national rankings don’t matter at his stores. “[USSTC’s top brand] might be No. 1 in Texas, but their flavored brands are powerful in my market,” the retailer said, noting he’s seen a “heavy migration” of customers to USSTC’s competition.

To that end, the Midwest retailer stocked up on the competing brand. “If I don’t have [Altria’s brands] for another month or two, I don’t know that they’ll ever get back their numbers.”

In a press release issued earlier this month, Brian Quigley, president and CEO of USSTC, Richmond, Va., said eight calls came from consumers in six states who said they found “a single large metal object in their dip, at least an inch in length and visible.”

On Altria’s recall website, Quigley said in a video that the product contamination, which officials said was confined to its Franklin Park, Ill., manufacturing facility, was a “deliberate and malicious act by an individual or individuals familiar with our quality and safety procedures."

“We value our relationship with our wholesalers and retailers and recognize the impact that this recall has had on them,” Quigley said. “We greatly appreciate their help in this effort.”

The Altria spokesperson said that since they are working with federal authorities to resolve the matter, he could not comment further on the investigation.

Referring to the frustration many retailers are feeling over what they believe to be a slow replenishment process, the Altria spokesperson said, “We understand that it’s frustrating to have consumers come into a retail store and not find their preferred brand. It is for us, too. But our goal over the next few weeks, both for consumers and our trade partners, is to have our brands available with no further disruption.”

For retailers in contact with CSP, that moment can’t come soon enough.