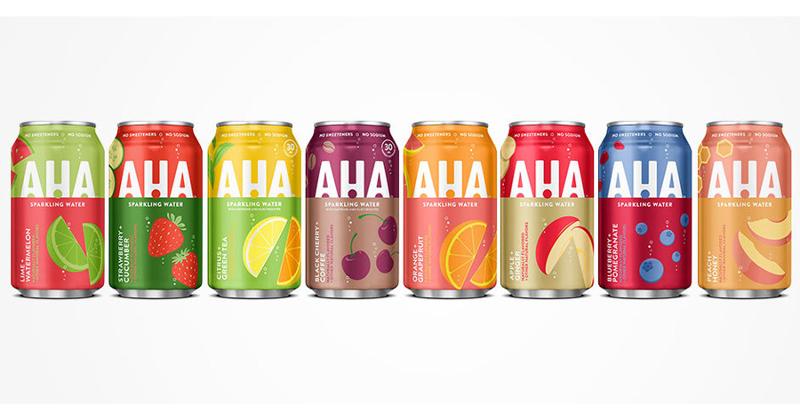 ATLANTA — Coca-Cola North America is making changes to its water category. The beverage company will launch Aha sparkling water in March 2020 and hopes to draw in customers with the drink’s flavor combinations and colorful packaging.

This will be the beverage company’s first new brand since 2006, when Gold Peak tea launched. Aha sparkling water, which has no calories or sodium, will come in eight flavors: Lime and Watermelon, Strawberry and Cucumber, Citrus and Green Tea, Black Cherry and Coffee, Orange and Grapefruit, Apple and Ginger, Blueberry and Pomegranate, and Peach and Honey.

The Citrus and Green Tea and Black Cherry and Coffee flavors include 30 milligrams of added caffeine.

The water will be available in single flavor eight-packs of 12-ounce cans. Two flavors will also be offered in single 16-ounce cans, which can be merchandised as immediate consumption, according to Coca-Cola. Aha will be priced in line with products found in the mainstream sparkling water category.

“There are unmet needs for consumers in the category today, both for those who don’t drink sparkling water regularly today and for those who do,” said Julie Siwemuke, sparkling water director for Coca-Cola North America. “When shoppers browse the sparkling water aisle, they’re looking for interesting and approachable flavors that offer a refreshing treat. They're also drawn to fun, colorful brands with personality.”

Aha went from concept to prototype in about six months, according to the company. To develop the beverage, Coca-Cola tested 50 flavor combinations and spoke to a diverse range of customers across channels, including convenience, grocery, drug and mass retail.

“Our partners told us, ‘We don’t need yet another lime- or berry-flavored sparkling water. We need something fresh and new that can help grow the category’,” Siwemuke said.

The new brand will replace Dasani Sparkling, which has been on the market since 2014 and will continue to be offered on Dasani PureFill and Coca-Cola Freestyle.

The Atlanta-based company’s sparkling water portfolio sales were up 27% in 2018, according to Nielsen data.