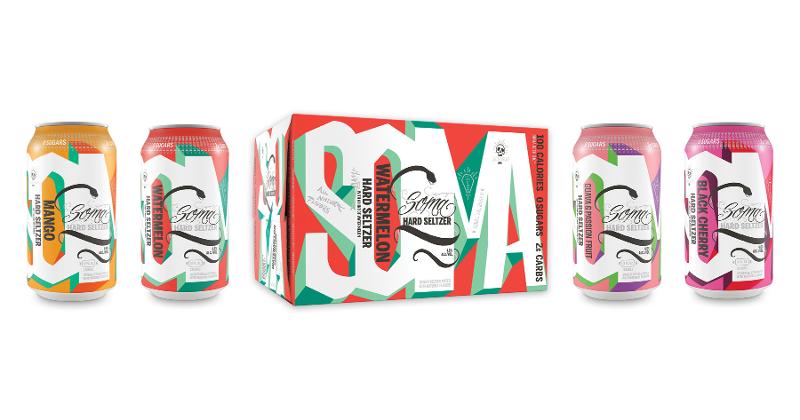 CHICAGO — When Nico Freccia heard four years ago that The Boston Beer Co. was launching a hard seltzer, he thought, “What are they doing that for?”

The result was Truly Hard Seltzer, now one of the top-selling seltzer brands in convenience stores and across all markets. The beverage took in more than $100 million in sales just in c-stores in 2019, and sold more than 2.9 million cases, according to Chicago-based market research firm IRI.

Many beer manufacturers, large and small, have since followed in Boston Beer Co.’s footsteps. That includes 21st Amendment Brewery, where Freccia is cofounder and COO. 21st Amendment launched Soma Hard Seltzer, a 100-calorie drink that comes in Guava & Passion Fruit, Mango and Black Cherry. The name pays tribute to the South Market Neighborhood of San Francisco, where the brewery is based.

“You have to go where the consumer's going,” Freccia said. “And the consumer is going toward seltzer, clearly. So we're pushing on that.”

Building a palate for alcohol used to be a rite of passage, typically starting with beer and graduating to wine and spirits over time. But millennials have more options now, including choosing a fruity hard seltzer over a yellow beer, said Nathan Greene, consulting analyst with New York-based Beverage Marketing Corp. The taste, low-calorie count and low alcohol by volume (ABV) of hard seltzers are a big draw for many consumers.

Hard seltzers are not necessarily taking away from beer sales though, Greene said. They are sourcing consumers from across alcohol categories.

“What’s really key is that it's sourcing from consumers, who may have rejected beer, from the wine and spirits categories in a way that the malt beverage space just had not been able to in the past decade or so,” Greene said. “And what's really interesting is you're starting to see previous craft beer drinkers now getting into seltzer,”, which Green said is indicative of how hard seltzers are pulling sales from every alcohol segment.

Four years after the first hard seltzers hit c-store shelves, more retailers are seeing them as a way to boost the beer category.

“Our experience at 7-Eleven shows us that hard seltzers are driving incremental sales for our stores,” said Brooke Hodierne, vice president of merchandising at Irving, Texas-based 7-Eleven Inc. “However, interestingly, sales of other key brands and segments have neither increased nor decreased with the growth of hard seltzer sales volume.”

Hard-seltzer sales soared in the past year, taking in more than $1 billion in sales in c-stores for the 52 weeks ending on July 25, according to Nielsen. That’s a 368% change in dollar sales compared to 2019.

Although hard-seltzer growth across all markets slowed for the week ending on July 25, the subcategory was still showing triple-digit growth amid the COVID-19 pandemic, according to a report from New York-based investment firm Cowen.

It remains, by far, the fastest growing segment in total beverage alcohol when looking at all markets, according to the report, which cited Nielsen’s year-over-year dollar sales growth.

Hard seltzers are rapidly becoming one of 7-Eleven’s go-to beverages in the beer category, Hodierne said. The average store carries four hard seltzer brands: White Claw from Mark Anthony Brands, Truly from Boston Beer Co., Bud Light Seltzer from Anheuser-Busch and Corona Hard Seltzer from Constellation Brands. Most of the chain’s more than 9,300 stores stock up to 13 SKUs, with multipacks accounting for the largest portion of total sales volume, she said.

“Our rule of thumb is to have at least one full shelf of singles and a minimum of two shelves of multipacks in the vault. That serves the grab-and-go customer, as well as the volume buyer,” Hodierne said.

The hard-seltzer customer is evolving, Hodierne said. At first, the customer was primarily female and ages 21 to mid-30s.

“Without a doubt, this category has brought more women into our stores,” Hodierne said. “Hard seltzers provide an attractive, lighter alcoholic-beverage alternative that offers refreshment and great flavor with fewer calories. The summer heat makes it even more appealing.”

That customer has broadened in recent months to include men and women, and the age range has expanded to consumers in their mid-50s, she said.

Hard seltzers are having “a moment” in the beverage market as a whole for several reasons, Hodierne said, including strong fan base, pack sizes that cater to the needs of the c-store customer and the ability to order it easily online, including through 7-Eleven’s 7Now delivery app.

Online sales of hard seltzers have also recently spiked for Philadelphia-based delivery startup and online c-store goPuff, which does business in more than 150 cities. In April, about 25% of goPuff’s sales in the alcohol category were for hard or spiked beverages, and hard and spiked beverage sales had a 200% lift in April 2020 compared to January, goPuff’s Director of Alcohol Randy Ornstein said.

“In a survey of goPuff customers, 78% of participants cited taste as the attribute they liked most about hard seltzer,” Ornstein said. “With this in mind, variety packs are some of the most-ordered seltzer ‘flavors’ on goPuff. Across brands, popular single flavors include Black Cherry, Lemonade and Mango. About 40% of respondents said they liked that hard seltzer isn’t too strong.”

goPuff stocks 43 different hard or spiked brands, he said, and as more brands enter the market, the company will keep adding to that.

“We are not interested in bringing on new SKUs that will just cannibalize the sales we have; we are looking for brands to grow the size of pie through their differentiation,” Ornstein said.

He said consumers are ordering both beer and hard seltzers, with hard seltzer more likely to over index with customers in their 20s.

“In fact, customers we surveyed said they were both more likely to order beer for delivery and also indicated they plan to drink more beer than any other alcohol beverage this summer, though hard seltzer was a close second,” Ornstein said.

Beer and wine manufacturers have watched the hard-seltzer trend closely, and many have thrown their hats in the ring. The segment is expected to be worth more than $2.5 billion in c-stores by the end of 2020, Anheuser-Busch’s senior director of category development Sara Hillstrom said.

“In the past year, 43% of new c-store seltzer shoppers were first-time c-store beer shoppers,” Hillstrom said. “This means that seltzers are an effective way to bring new shoppers into your stores.”

Molson Coors is investing in hard seltzers because it is a trend that is not going away, said Marty Maloney, manager of media relations for the Chicago-based company. The company recently introduced Vizzy hard seltzer and launched Coors Hard Seltzer in September.

“We are so bullish on the seltzer category, we recently announced a substantial investment in our Fort Worth brewery to boost capacity by more than 400% to support the production and packaging of our expanding portfolio of hard seltzers,” Maloney said.

At E. & J. Gallo Winery, which makes High Noon Sun Sips and Barefoot Hard Seltzers, the company treats hard seltzer as its own category, which is how consumers perceive it, said George Ubing, director customer development, convenience channel, at the Modesto, Calif.-based company.

“We see our customers reaching for hard seltzer during consumption occasions that were previously reserved for beer, Hard seltzers have become the drink of choice for consumers’ more sessionable drinking occasions,” he said.

Hard seltzer is ultimately the answer to the increasing demand for beer alternatives, driven by health- and ingredient-conscious consumers that are shifting their preferences to low-calorie, more sessionable alternatives, Ubing said.

What ended up changing Freccia’s mind about 21st Amendment Brewery entering the hard seltzer game? Many reasons, he said, one being that consumers, particularly those in their 20s, want options.

“They drink everything, so they're not loyal to a particular category or a particular brand,” Freccia said. By offering a local option in and around 21st Amendment’s home of San Francisco, Freccia hopes to appeal to customers beyond the beer category. “I think they're experimenting with a lot of things.”