Florida attracts millions of tourists every year. Hundreds of thousands more put down permanent roots. In fact, the state’s population grew from 18.8 million in 2010 to an estimated 20.6 million as of July 2016, making it the third most populous state, according to the U.S. Census Bureau. 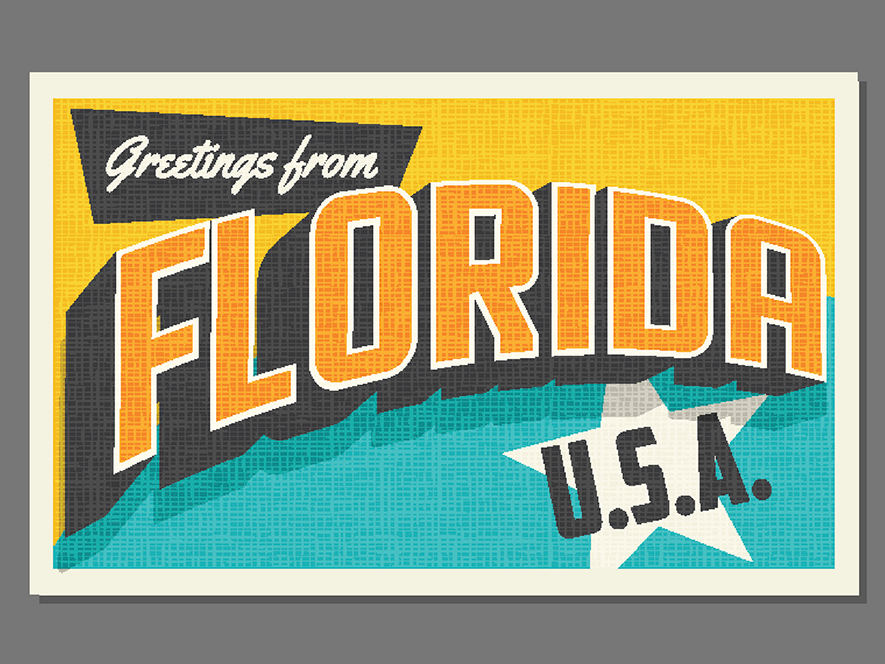 “We foresee this optimism prevailing in the short term,” said Chris Owen, research manager for Cushman & Wakefield, a real-estate agency based in Orlando, Fla., in a 2016 report examining the state’s population trends and its economic effects. “All of the relevant indicators suggest Florida will remain one of the nation’s premier live-work-play destinations.”

That’s good news for convenience retailers such as Wawa, CEFCO, RaceTrac and 7-Eleven—all of which have either entered the Sunshine State in recent years or grown an existing presence.

Some have given credit for Florida’s economic boon to Gov. Rick Scott, who is halfway through his second term after first taking office in 2011. 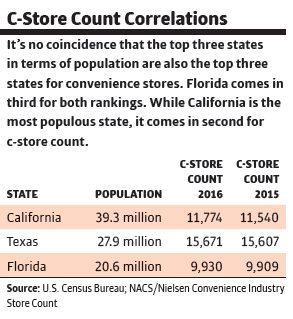 Scott even takes credit for the more than 1.2 million private-sector jobs created in Florida since December 2010. But for c-stores, the attraction to Florida goes beyond impressive numbers.

“It’s a market that has been mostly ill-served by both the age and quality of retail facilities that are there for an extended period,” says Jim Fisher, CEO of IMST Corp., a Houston-based fuel and retail sales forecaster.

At 9,930 c-stores, Florida is the third-largest c-store market of any state, trailing California (11,774) and Texas (15,671), according to recent NACS/Nielsen Convenience Industry Store Count figures.

But most of the legacy sites in Florida are “older offerings, older stores,” says Fisher.

“When there’s older offerings and older stores—markets that have a lot of potential and a high degree of impact—somebody’s going to eventually notice that potential and the possibilities that exist,” he says. “It’s the same guided philosophy that’s been used by other companies in entering other markets. QuikTrip went to Charlotte, N.C., because there was not a core of strong players in Charlotte based on quality of operation.”

CEFCO was one c-store chain that noticed the state’s potential. In 2015, the Temple, Texas-based retailer made Florida its seventh state of operation, entering it with a new  5,500-square-foot prototype that leveraged its proprietary Fresh Eats Cafe program.

CEFCO, which also operates in Texas, Oklahoma, Louisiana, Alabama, Arkansas and Mississippi, now has six locations in the Florida panhandle out of more than 230 stores chainwide.

Wawa also placed an emphasis on foodservice when it migrated to the region. Its 4,600-square-foot store designed for Florida features a kitchen dedicated to baking fresh hoagie rolls daily and a full-service specialty-beverage area. The chain, which has more than 730 c-stores in Pennsylvania, New Jersey, Delaware, Maryland, Virginia and Florida, said it plans to open 25 to 30 stores every year in the Sunshine State for the next several years.

All of this puts increased pressure on retailers who have long called Florida home.

“It’s a very competitive market, but it’s good for the industry,” Bowman says. As c-stores invest back into their facilities and focus on their food programs, it creates more choices for consumers, he says.

Atlanta-based RaceTrac Petroleum is remodeling its older c-stores in Florida to bring them up to speed with its new store prototype and enhanced offerings. The remodel features a more modern layout with updated building architecture, an expanded coffee area with more counter space, and additional indoor and outdoor seating. The retailer also plans to open nearly 50 more stores in Florida in the next two years.

“Florida is an important market for RaceTrac,” said Robby Posener, vice president of marketing, merchandising, construction and architecture and design, in a January statement about the company’s growth in the state.

RaceTrac has more than 200 stores in Florida, many of which are located strategically along commuting routes and interstates, “leaving us ever more confident of our ability to double our store count in Florida in the coming years,” Posener said.

As for Irving, Texas-based 7-Eleven Inc., it too is planning “aggressive growth” for South Florida in 2017, with a goal of opening 20 locations this year, according to Charles Bantos, the chain’s real-estate manager.

“They’re gaining a new life,” Fisher says of 7-Eleven. “They’re on a renewal and  refreshment campaign.”

With all this focus on Florida, it begs the question: Will the state become overcrowded?

“There’s plenty of opportunities that exist,” Fisher says. While some areas are saturated in terms of the sheer number of operators, there is room for more higher-quality retailers. Also, no one really knows how long this economic boon in Florida will last.

“There are too many variables and factors,” says Fisher. “All you can do is look at it and say … ‘Would this be a viable retail facility for us to develop if the market characteristics significantly change?’ If you still look at it and say ‘Yes, it’s viable’ … then you pursue it.”