“If the industry was earnest about … new products that would still satisfy peoples’ taste for nicotine ­(with hopefully much lower risks), there could be [a] public health virtue.” 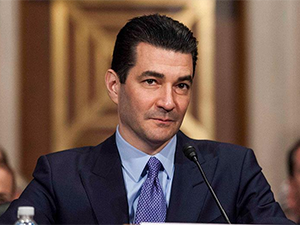 By calling the potential of smoking alternatives to traditional combustible cigarettes a “public health virtue,” the new head of the U.S. Food and Drug Administration (FDA) may be putting forth the most straightforward answer yet about his view on electronic cigarettes and other so-called “risk-reduction” products.

Last month, the Senate voted 57-42 to confirm Dr. Scott Gottlieb as the FDA’s new commissioner, potentially bringing a more sympathetic view of risk reduction than Mitch Zeller, director of the FDA’s Center for Tobacco Products (CTP), Rockville, Md. Zeller has often sided with anti-tobacco groups regarding risk reduction as the FDA and the CTP have rolled out policies governing tobacco products.

After several hearings, Gottlieb passed the Senate Committee on Health, Education, Labor and Pensions and overcame challenges by several Democratic senators to achieve confirmation. His confirmation now means that, among other things, Gottlieb will be Zeller’s boss.

“Certainly, it would be a great opportunity if Scott Gottlieb’s ascension at the FDA leads to Mitch Zeller leaving the agency,” says Gregory Conley, president of the American Vaping Association, Hoboken, N.J. In the past, Conley has called Zeller out for initially appearing to be open to risk-reduction arguments, only to announce later regulation that’s more cost-prohibitive for the industry. (Click here for related story.)

According to Vapes.com, Gottlieb could “fire Zeller on the spot,” but both have ties to pharmaceutical companies, which could cloud matters because that industry has stakes in cessation products. E-cigarettes have threatened that business in recent years.

Whether Zeller stays, Gottlieb’s effect on the tobacco category may be muted at first. One stumbling block to his confirmation are numerous investments he made or has been involved in regarding medical and pharmaceutical concerns. Some have argued he would be ineffective against major drug companies in combating the nation’s opioid epidemic.

More important for tobacco was his investment in Kure Corp., an e-cigarette manufacturer and retail franchise based in Charlotte, N.C. Because of his ties to vaping, Gottlieb recused himself from commenting on vaping for a period of one year.

Such a recusal may compromise efforts to get e-cigarettes out from under the FDA’s current “deeming” rule, which places a rigorous and expensive application-and-approval process on all products put on the market since Feb. 15, 2007—encompassing virtually all vaping products on the U.S. market today.

Of course, tobacco will be only one of many issues for Gottlieb, with nationwide concerns such as drug-approval policies and the opioid crisis garnering big headlines. Still, many are hopeful that, based on Gottlieb’s past actions and statements, he will ultimately favor all levels of tobacco.

Gottlieb is no stranger to the FDA. He served as a top official in the agency during President George W. Bush’s administration, holding a variety of roles, including deputy commissioner for medical and scientific affairs.

Outside the government, Gottlieb has been a venture partner at New Enterprise Associates, Chevy Chase, Md., where he focused on healthcare investments, and he has longstanding ties to the drug industry. He served as a consultant or board member for several companies, including GlaxoSmithKline, Brentford, U.K., and Vertex Pharmaceuticals, Boston.

As a frequent contributor to news organizations such as Forbes and The Wall Street Journal, Gottlieb has urged the FDA to move more quickly to approve treatments and has said it can be too bureaucratic.

In a 2013 Forbes article, he expressed concern that the FDA was becoming dismissive of the opportunity that risk-reduction nicotine-delivery devices offered. In describing the FDA’s evolving stance, he highlighted its initial attempts to forge a path for products that would wean people away from traditional cigarettes. In the article, he supported tobacco manufacturers’ involvement in that process.

Gottlieb praised the FDA for trying at the time to keep the process unbiased. However, he wrote, “Activists have managed to infiltrate the middle ranks of the agency’s center.”

In the Forbes article, Gottlieb showed an openness to tobacco companies’ needs, saying, “The anti-tobacco researchers want to shut down cigarette makers. It’s really that simple. The cigarette makers, presumably, don’t want to go away. By many measures, it’s clear that some tobacco firms want to transition into new products that carry fewer legal, business and hopefully health risks.”

Gottlieb has also revealed his views on other tobacco issues. In his confirmation hearing, he declined to commit to a ban on flavored cigarettes, according to The Hill.

During the hearing, Sen. Patty Murray (D-Wash.) asked Gottlieb about e-cigarette flavors such as “gummy bears” and “cookies and cream.”

“I recognize there is a line here somewhere,” Gottlieb said, “and I don’t know where that line gets drawn. I think that line needs to get drawn by people who are experts in evaluating that science, and I  want to support that.”

Gottlieb said questions persist around when e-cigarettes could help transition people off combustible cigarettes, as well as when they might be a gateway to adolescent smoking.

“I think a properly constructed and overseen regulatory process should have the capacity under the authorities Congress gave the agency to make these determinations,” he said.

For industry advocates such as Conley of the American Vaping Association, having a friend leading the FDA may make all the difference. “A lot can be accomplished in four or eight years that can change how things happen for decades,” Conley says.