CHICAGO -- First lady Michelle Obama stopped in Chicago this week to celebrate the progress that has been made to improve the “food desert” issues plaguing the nation. However, she still took time to point the finger at the convenience-retailing industry. 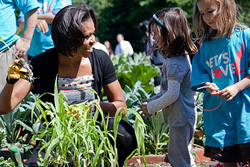 "Before Walgreens started selling fruits and vegetables and other grocery items, there were not a whole lot of convenient places for people in certain communities to buy fresh produce," Obama said during a press conference held in a Walgreens Drug Store on Chicago’s South Side, according to a report in the Chicago Tribune. "And a lot of folks wound up buying their groceries at gas stations at ridiculously high prices, not the right quality at times, or convenience stores, places with few, if any, healthy options."

Obama has focused on the issue of childhood obesity and better food choices through the Let's Move program.

The first lady's effort to educate people on healthy eating coincides with Chicago Mayor Rahm Emanuel's push to see more grocery stores open in underserved areas of the city. He hosted mayors from eight other cities to discuss how to press supermarket executives to build stores in needy communities.

Emanuel announced that the grocery chains Supervalu, Roundy's Supermarkets, Wal-Mart and Aldi have committed to opening 17 grocery stores in the next few years, while Walgreens has made plans to add 19 expanded stores with fresh food.

"I just want to tell you how much I appreciate the first lady's leadership on this issue," Emanuel said. "We took what you were doing on the national level and tried to make it an example here in Chicago."

Click here to read CSP Magazine’s coverage of how the convenience-store industry has reacted to Michelle Obama’s comments about food deserts.