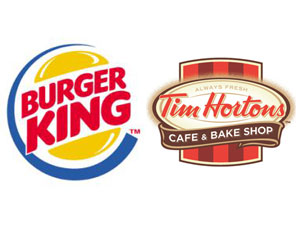 The company is majority-owned by 3G Capital, the previous majority owner of Burger King, which holds a 51% stake.

Oakville, Ontario-based Restaurant Brands International is one of the world's largest QSR companies with approximately $23 billion in system sales and more than 18,000 restaurants in 100 countries.

Tim Hortons is one of the largest restaurant chains in North America and the largest in Canada. Its menu includes premium coffee, hot and cold specialty drinks (including lattes, cappuccinos and espresso shots), specialty teas and fruit smoothies, fresh baked goods, grilled Panini and classic sandwiches, wraps, soups, prepared foods and other food products. As of Sept. 28, 2014, Tim Hortons had 4,590 systemwide restaurants, including 3,665 in Canada, 869 in the United States and 56 in the Gulf Cooperation Council.

Founded in 1954, Burger King is the second largest fast-food hamburger chain in the world. The Burger King system operates in approximately 14,000 locations in 100 countries and territories worldwide. The restaurants are owned and operated by independent franchisees, many of them family-owned operations.