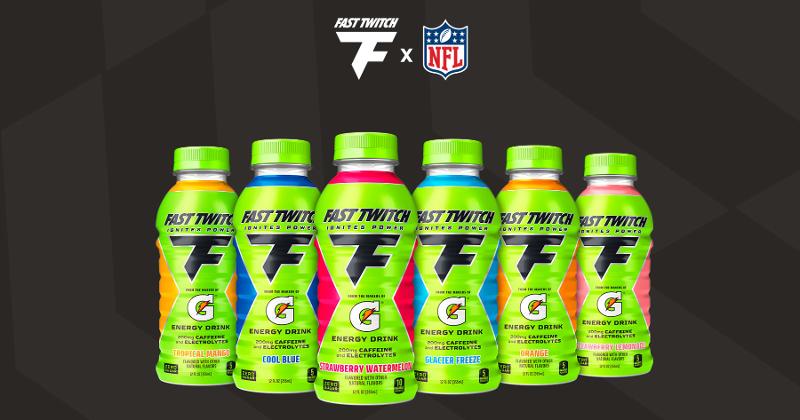 CHICAGO — Gatorade is releasing its first caffeinated energy drink. Fast Twitch is formulated without carbonation and sugar but has the same Gatorade flavors plus 200 milligrams of caffeine and B vitamins, the company said.

“As big as the energy drink category has gotten, it has remained largely distinct from the even-larger sports drink category, with no large-scale caffeinated energy drinks designed to meet the needs of athletes until now,” Gatorade said.

Gatorade is preparing an early 2023 rollout for Fast Twitch, which Chicago-based Gatorade said brings several firsts to the energy category.

Fast Twitch is the first athletic energy drink developed in consultation with the NFL and sports performance experts, Gatorade said, and NFL athletes will have exclusive access to the beverage during the 2022-23 season.

“You’ll begin seeing it on football sidelines in the coming weeks,” said Gatorade, whose parent company is Purchase, N.Y.-based PepsiCo.

Fast Twitch, which comes in 12-ounce bottles, is available in cool blue, glacier freeze, orange, strawberry lemonade, strawberry watermelon and tropical mango. It has about twice as much caffeine as a 12-ounce can of Red Bull.

“At Gatorade, we’ve spent decades studying the best athletes in the world, and what we’ve learned is there hasn’t been an athletic energy solution they can trust that is designed for them to start fast and ignite their performance,” said Anuj Bhasin, vice president of marketing and general manager for Gatorade Brands. “We’re thrilled to change that with the launch of Fast Twitch, the first-ever caffeinated energy drink from Gatorade, designed for athletes in every way, from formula to design and packaging.”

Reggie Scott, vice president of sports medicine and performance for the Los Angeles Rams, added, “Our priority has always been to provide our players with the best, most innovative products to help them perform their best. Fast Twitch was developed by our trusted partner Gatorade in consultation with sports performance experts and is a first of its kind product designed for athletes on an NFL field or anywhere else sports are played.”

In a move in August related to PepsiCo’s increased involvement in energy drinks, PepsiCo and Celsius Holdings, maker of fitness energy drink Celsius, formed a long-term strategic distribution arrangement that includes retail and foodservice channels. The agreement transitions Celsius’ U.S. distribution to PepsiCo, which is investing $550 million in Celsius to support its growth and makes PepsiCo the preferred global distribution partner.