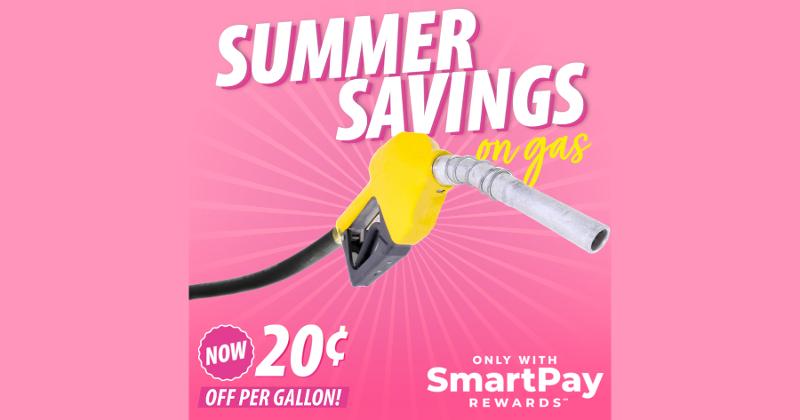 WESTBOROUGH, Mass. — Convenience-store retailer EG America will again run its Summer of SmartPay promotion, in which SmartPay Rewards App users will automatically save an additional 10 cents per gallon, totaling 20 cents in savings on every gallon. The promotion runs from now through September 6 in all locations except Cumberland Farms.

The retailer is repeating the promotion to recognize that its SmartPay Rewards program has reached $5 billion in fuel sales since its launch in 2013 and has saved members $200 million, the company said. SmartPay Rewards members automatically save 10 cents on every gallon of fuel, every day at EG retailers throughout the country including Cumberland Farms, Certified Oil, Fastrac, Kwik Shop, Loaf N’ Jug, Minit Mart, Quik Stop, Tom Thumb and Turkey Hill. The program is free to join and free to use.

“Over $5 billion in fuel sales and $200 million in savings later, we’re immensely proud of the results and the continued value to our guests. As we recognize this milestone, we’re excited to kick off the Summer of SmartPay and deliver even more savings to our guests as they get back on the road this summer,” said George Fournier, president of EG America.

Customers who use SmartPay Rewards get exclusive access to additional savings and coupons, a streamlined payment process and a free Farmhouse Blend coffee or fountain and frozen beverage for every 80 gallons of gas purchased at all EG America locations nationwide.

Founded in 2001 by the Issa Family, UK-based EG Group is a c-store operator which currently employs about 50,000 colleagues working in more than 6,200 sites across the United Kingdom, Europe, United States and Australia.

Maverik Offers Savings at the Pump for Road Trippers