OAKBROOK TERRACE, Ill. -- They just don’t make ’em like that anymore. And some brands are banking on it, according to a Convenience Store Products report. 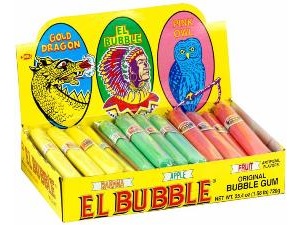 Everything old is new again, and in the confectioner's world, nostalgia is equating to robust sales as consumers purchase with their hearts as well as their stomachs.

"When you were a kid, candy was king--it brings you back to childhood," said Reilly Robinson Musser, category manager of candy/sweet snacks for Robinson Oil Corp., Santa Clara, Calif., which has 34 Rotten Robbie stores.

Sometimes nostalgia takes the form of retro packaging, or in some cases it’s the return of a discontinued brand. Case in point: M&M’s Crispy Chocolate Candies. Mars relaunched the brand in January “after a decade of countless pleas from consumers,” said Tanya Berman, senior brand director for M&M’s/Mars Chocolate North America.

Since the relaunch, M&M’s Crispy has experienced strong national exposure and high repeat rates, said Berman. “Consumers asked for its return via Facebook, online petitions and phone calls,” she says.

*Taste of Nature introduced a line of bitesize candies based on the MoonPie brand.

*R.M. Palmer rolled out Yoohoo Candy Bars, based on the chocolate drink.

Baltimore, Md.-based, 120-year-old Goetze’s Candy Co., with its Goetze’s Caramel Creams and Cow Tales brands is proof that what’s old can be new. Millennials, literally, eat it up.

“Millennials are all about authenticity of brands,” and have become power users of Caramel Creams, said John Leipold, director of sales and marketing for Goetze’s.

Corporate decisions to capitalize on the nostalgic can be “cyclical, as lapsed consumers who grow up with brands migrate away. We want them to return to the fold,” Leipold said.

Goetze’s, like other heritage brands such as Mars and Hershey’s, “is a generational candy, and that nostalgic bent has always been there. If you go into mall stores, you’ll find a nostalgic set in every one of them,” Leipold said.

Inspired by restaurant chain Cracker Barrel, Carmi, Ill.-based Huck’s Convenience Stores decided three years ago to create a nostalgia candy set, with much success. “I saw it as a coming trend,” said Randy Adams, center-store category manager for Huck’s. “We put in an eight-foot nostalgic section in all stores, above our peg candy area, and tinkered with the mix.”

“Changemakers in c-stores had slowly disappeared, but they’re starting to return,” Leipold said. Products such as Goetze’s Cow Tales in a one-ounce stick are ideal for that opportunity, he said.

And as with any other category trend, some nostalgic candy buys have been winners, and others have been tougher sells. Musser tried nostalgic brand Black Jack Gum, but “the sales just weren’t there to make me want to order more,” she said.

While some retailers are finding success creating new sets of old, legacy products, there is still a lot of opportunity out there for some retailers and those older brands. “We have heard talk but not a lot of action from c-stores in designing nostalgic sets,” said Leipold.

The Return of Hydrox