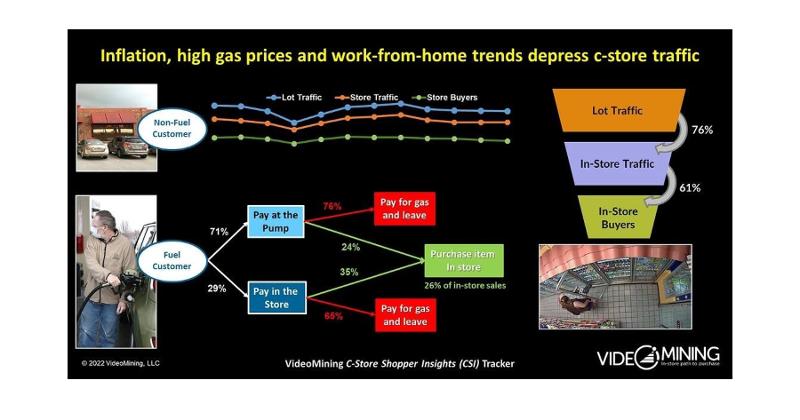 STATE COLLEGE, Pa. — The average number of weekly in-store buyers in convenience stores was down 14% in 2021 compared to the pre-pandemic weekly average in 2019, according to a recent report from VideoMining’s C-Store Shopper Insights Tracker. The store-traffic data firm places the cause of the decline squarely on Inflation, high gas prices and continuing work-from-home trends.

Despite the depressed traffic, however, the average weekly sales per store for the convenience channel was 4% higher relative to 2019, VideoMining reported. This was partly due to inflation and partly due to the healthy appetite of c-store shoppers for buying a range of in-store products, adding up to $58,456 in sales (excluding fuel) per store per week.

“There has certainly been shifts in behaviors and trip missions in the channel,” VideoMining said. “Breakfast gained significant share of trips in 2021 compared to the previous year, largely as more of the workforce began returning to the office and once again commuting in the mornings. That was a boon to categories like coffee, energy drinks and prepackaged food, which all performed exceptionally well in the daypart.”

The shares for food and beverage categories were up year-over-year, while tobacco and alcohol trip missions were down, according to the report. Key growth categories included refreshing beverages like sports drinks (up 24% share) and water (plus 13%), snacks such as cereal bars (up 15%), meat snacks (up 12%) and candy (up 9%), as well as fresh food options, including roller grill (up 13%) and prepackaged food (up 6%). Their gain reduced the dominance of categories that held up through the pandemic such as cigarettes, which declines share 7%, and beer, down 6%.

As VideoMining continues to monitor high fuel prices, which undoubtedly hurt overall store traffic, it says the good news is that a majority (72%) of visitors to c-stores in 2021 were nonfuel buyers.

There were plenty of other opportunities to improve in-store conversions, Video Mining said, especially as shopper dynamics in the channel continue to shift. For example, 2021 saw further gains in the proportion of younger shoppers in c-stores, with Gen Zs (18-26 years old) and millennials (27-41) now making up more than 53% of the shopper base.

An in-depth analysis of the product segments also revealed patterns that indicate shifts in shopper preferences, for example, moving to hard seltzers and ready-to-drink (RTD) cocktails from traditional beers. So even as store heatmaps continue to turn more red after the pandemic-driven blue of slow traffic, there are plenty of opportunities for fine-tuning merchandising and marketing strategies to connect better with today’s c-store shopper and boost in-store performance, according to VideoMining.

Alcohol Sales Down in Early March

How Do Women, Men Shop in Stores?