NEW YORK -- Electronic cigarettes sales have been on the decline for the past several months and April was no exception. In fact, according to Nielsen, c-store electronic cigarette dollar sales declined for the first time during the four-week period ending on May 10, 2014. During that timeframe, dollar sales were down 10.4% and year over year net pricing also declined by 13.9%. Unit sales grew by 4.1%, but it was not enough to offset the losses in dollar sales and pricing. 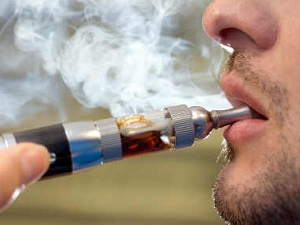 Wells Fargo analyst Bonnie Herzog argued that the soft Nielsen numbers do not paint an accurate picture of what’s really going on in the segment.

“Negative pricing trends could be due to increased penetration of kits, which offer a lower price-per-cartomizer,” Herzog wrote in a research note. “Further, we believe the sales decline is more reflective of volume moving to vapors-tanks-mods (VTMs), which tend to be sold in non-tracked channels (especially vape shops) as Nielsen e-cig data is not a proxy for the vapor category as a whole.”

Although the “meaningful vapor distribution channels” of tobacco shops and vape shops are not currently tracked by Nielsen, Herzog’s Wells Fargo research estimates $800 million of retail VTM sales and an additional $300 million in online VTM sales. That $1.1 billion combined with an estimated $1.4 billion e-cig sales ($700 million in Nielsen tracked channels and an additional $700 million in non-tracked channels, including online) suggests what Herzog described as the “complete vapor category” is netting nearly $2.5 billion sales annually.

“Vapors/tanks are underrepresented in Nielsen but are growing two times faster than the vapor category based on our ‘Tobacco Talk’ survey,” Herzog said. “Investors have been questioning if the investments the major players are putting behind vapor justify a possible longer timeline to contribute to the bottom line.”

And though dollar sales were down overall, Herzog noted that $37 million in c-store sales over the four week period was still substantial.

“While we remain bullish on the category long term, we acknowledge near-term e-cig profitability could be soft, particularly as volume moves to VTMs,” she said. “Bottom line: we continue to believe

vapor consumption could surpass combustible cigarettes in the next decade.”

To Market, To Market To Buy an E-Cigarette