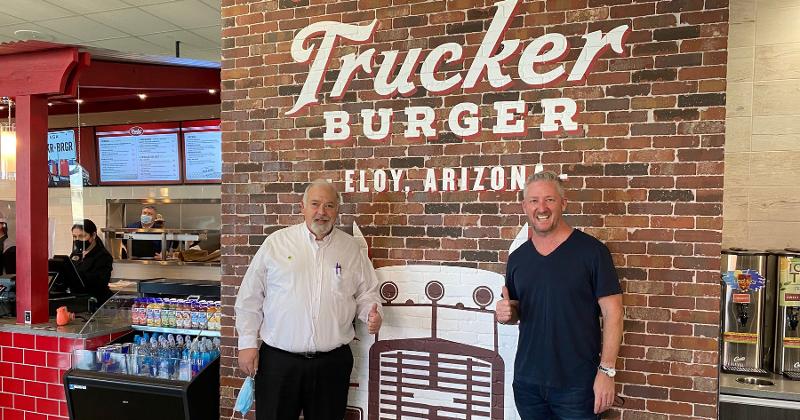 Trucker Burger restaurant, a concept from celebrity chef and restaurant owner Tim Love, who specializes in “urban Western” cuisine, was inspired by those who drive America and offers a gourmet menu of diner classics. Besides burgers, selections include sandwiches, griddled hot dogs, stacked nachos, hand-cut fries and soft-service ice cream.

“We spent many months perfecting the menu, and I can’t wait to share our great new burger with you all!” said Love (pictured, right, with Mark Benner, general manager and CEO of the Eloy Chamber of Commerce). Love owns restaurants from Knoxville, Tenn., to Seattle, but his roots are in Texas.

In an Instagram post, Love, whose other establishments include the Woodshed Smokehouse and the White Elephant Saloon, both in Fort Worth, Texas, said, “This gourmet, hearty, and delicious burger stop is made specifically for the men and women who keep this country moving, pro drivers. So if you’re hauling freight near Eloy, AZ or in the area and looking for the best burger around, come check out the nation’s FIRST Trucker Burger off Exit 203 I-10.”

This Xpress Fuel location also will sell grab-and-go offerings including roller grill, nachos and an array of hot and cold packaged sandwiches and snacks.

Trucker Burger, open from 9 a.m. to 10 p.m., and this Xpress Fuel location are both owned by the Pilot Co. and its One9 Fuel Network. They will add about 50 jobs, and the company said it expects to add $2.24 million annually in state and local taxes.

Pilot Co., Knoxville, Tenn., is No. 12 on the CSP’s 2020 Top 202 ranking of c-store chains by number of retail outlets. It operates about 750 truckstops under the Pilot, Flying J and Xpress Fuel brands. The One9 Fuel Network includes a variety of branded stops and fueling locations, some of which are owned and operated by Pilot. It connects a variety of fuel stops to offer value, convenience and perks to fleets and professional drivers at more than 220 locations nationwide.